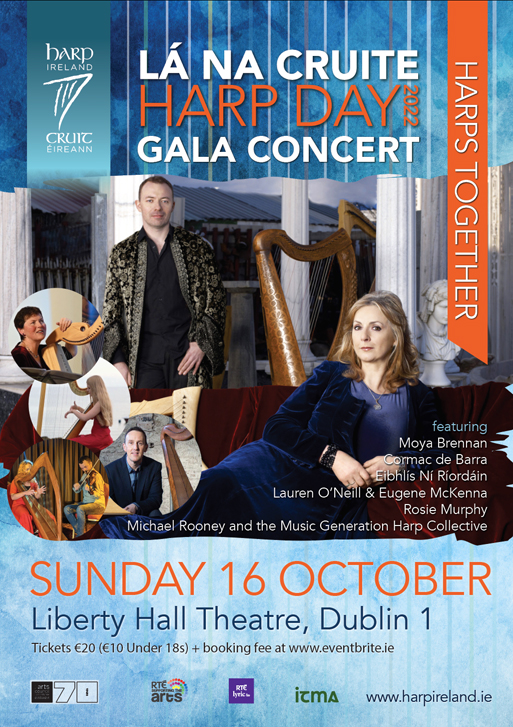 Pedal harpist Rosie Murphy will perform a programme that includes an exciting new work for harp, violin and French horn, for which she’ll be joined by Samuel Kane (violin) and Joe Clarkson (French Horn). Inspired by her interest in traditional Irish, Baroque and minimalist music, her composition includes aspects of all three styles and explores extended techniques. Rosie will be joined in concert by Dublin-based flautist Martina O’ Connell.

Winner of the Lifetime Achievement Award from RTÉ Radio Folk Awards in 2019, harper and singer Moya Brennan is the voice of Clannad and has collaborated with many notable artists including The Chieftains, Paul Brady and Bono. Moya will perform with the renowned harper Cormac de Barra. Longtime collaborators, Moya and Cormac have released three critically acclaimed albums together and will be joined by members of the de Barra family ensemble, Barcó to bring our Lá na Cruite│Harp Day celebration to a suitably uplifting close. 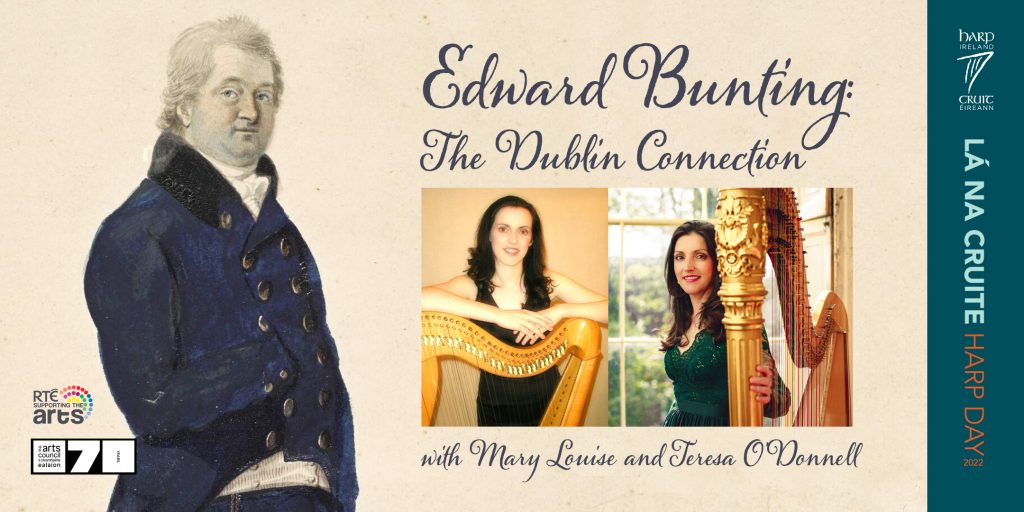 This special Lá na Cruite | Harp Day lecture by Dr. Mary Louise O‘Donnell is interspersed with harp music from harper Dr. Teresa O’Donnell and sets the scene for musical life in Dublin, and the role that Edward Bunting played in it, between 1818-43. Living in Baggot Street, he held posts as organist at St Stephen’s Church/The Pepper Cannister in Mount Street Crescent and, later at St George’s in Hardwicke Place. He was also involved in the Dublin Harmonic Institution, all the time working and advocating for his harpers’ music to be published. 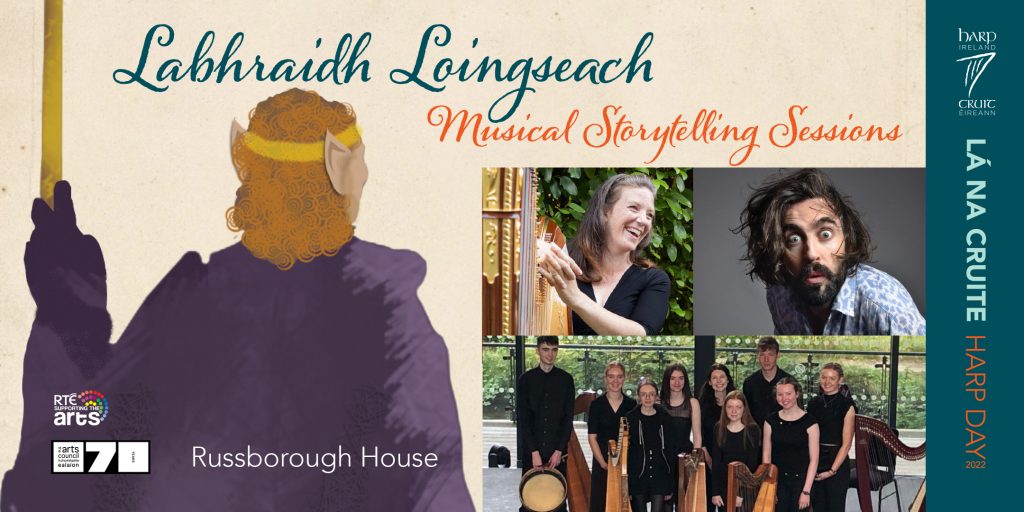 King Labhraidh Loingseach has a terrible secret. A secret kept hidden by his long hair and countless unlucky hairdressers…

Join the “foot-tappingly hilarious” storyteller and fiddle player Aindrias de Staic and brilliant harper Aisling Ennis for a brand new bilingual telling of an ancient Irish fable that will make you smile from ear to ear!

Rarely has storytelling been so foot-tappingly funny.”
– Theatre Guide, London

Enjoy beautiful harp music from members of the Bray CCÉ Harp Ensemble as they celebrate Lá na Cruite | Harp Day 2022 at Russborough. The ensemble will be popping up in various indoor and outdoor locations around Russborough during the early afternoon, including in the Russborough Café. Led by their musical director Rachel Duffy, the Bray CCÉ Harp Ensemble are a group of young musicians from Wicklow who have performed at An Chúirt Chruitireachta International Harp Festival, at various concerts organised by Cairde na Cruite and Cruit Éireann, and at Cornstown House’s ‘Music on the Farm‘ Series. In July they had their first international performance at the World Harp Congress in Wales in July 2022.

A talented vocalist, multi-instrumentalist and dancer, Gaeilge, is often at the heart of his performances. He has performed with Ireland’s finest musicians at prestigious festivals across the globe – recently guesting on the 25th Anniversary Tour of Riverdance at Radio City Music Hall, NYC. He has made numerous TV appearances in Ireland including Other Voices, The Late Late Show, and TG4’s Fleadh TV. Accumulating a total of 23 All-Ireland Titles from the age of 7, Séamus has performed alongside the finest ambassadors of Irish Music and has contributed to numerous albums to date.

Aisling Ennis is highly regarded as a harpist both at home in Ireland and internationally. A passionate performer, arranger and educator, she enjoys a varied career as a solo, chamber, orchestral harpist and educator. Aisling is known for her evocative playing across a broad spectrum of genres, her ongoing experimental collaborations and innovative approaches to programming.

Recent work includes her new adaptation of Mozart’s Magic Flute, collaborating with Peter Power of Sparsile Collective on his new work After Light: These Dark Citizens for Cork’s Midsummer Festival, solo appearances with Muireann Nic Amhlaoibh and Irish Chamber Orchestra for Kilkenny Arts Festival, the release of her debut solo album of compositions and ongoing recitals with Trio Tain.

Harp Day at glór with Aisling Lyons and Elaine Hogan

Described as ‘one of traditional music’s finest musicians‘ by Hot Press Magazine, Aisling Lyons is a multi award-winning harper and composer from County Clare who has performed all around the globe. Aisling will perform with Co. Laois musician Dale McKay, with whom she founded the band Harpanno. Together they’ll share a blissful selection of music for harp, handpan (a new instrument which draws inspiration from Caribbean Steal Drums) and piano. Aisling and Dale will be joined on the night by members of the Music Generation Laois and Music Generation Clare harp ensembles.

The second half of this celebration features long-standing collaborators, harper Elaine Hogan and fiddler player Sheila Garry. Known for their sensitive and soulful performances, Elaine and Sheila’s album of Paddy O’Donoghue compositions, The Shores of Lough Breda, has received widespread acclaim.

A video iteration of Aideen Barry’s multimedia performance, moving image and sound installation Oblivion / Seachmalltacht / ᖃᐅᔨᒪᔭᐅᔪᓐᓃᖅᑐᑦ inspired by the Bunting Harp Collection will be on view on the Living Canvas, Wilton Park. Oblivion / Seachmalltacht / ᖃᐅᔨᒪᔭᐅᔪᓐᓃᖅᑐᑦ was commissioned by Music Network and the Irish Traditional Music Archive under the Bunting Commission award. Living Canvas is a Cultural Initiative of IPUT Real Estate, and is presented in partnership with Dublin City Council.