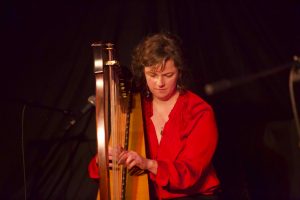 Women lead the way in this year’s Gradam Ceoil TG4 accolades, as ‘Musician of the Year’, ‘Young Musician of the Year’ and ‘Composer of the Year’ are awarded to highly-talented female musicians. Harper Laoise Kelly (pictured above) from Westport, Co. Mayo is announced as TG4’s ‘Musician of the Year’, and is one of the youngest recipients of the main award to date. Laoise will be awarded the title at TG4’s Gradam Ceoil gala concert which will take place in Belfast’s Waterfront Hall next February.  She is one of Ireland’s most significant harpers of her generation and uses a style of playing combining the techniques of fingerpads in the bass and fingernails in the melody on a thirty-four gut strung Paddy Cafferky harp. Laoise was a founding member of the traditional group Bumblebees, who recorded two albums, Bumblebees (1997) and Buzzin (1999) and who toured extensively across Ireland, the UK, Europe, the US and Canada. She was also a founding member of Fiddletree, a folk group from the US, Ireland, Cape Breton and Scotland, who all play instruments made from the same tree and who have released two albums, The Fiddletree (2011) and The Unfathomable Menagerie (2013).

Fiddle and Cello player, Sharon Howley, from Kilfenora, Co. Clare has been selected as this year’s Young Musician of the Year.  Sharon was immersed in traditional music from a young age with a rich musical lineage; her father sings and plays and both her grandfathers, Micky McCormack and Michael Slattery sang and played music. Her wider relations include the Mulqueeney’s and McCormack’s who played with the older formations of the Kilfenora Ceilí Band.

Lillis Ó Laoire, two time winner of the premier sean-nós singing competition Corn Uí Riada in 1991 and again in 1994 is to be awarded the title of Singer of the Year.

The other award recipients are Lifetime Achievement Award to Séamus Connolly, Outstanding Contribution Award to Nenagh’s Ned Kelly and Composer of the Year to Josephine Marsh.

This year’s awards will be presented at the Gradam Ceoil TG4 Concert in the Waterfront Hall, Belfast on Sunday 23rd February and televised live on TG4 at 9:30pm, hosted by Doireann Ní Ghlacáin & Dónal O’Connor, the 2020 Gradam recipients will be joined in performance on stage by their own special musical guests in a unique, star-studded line-up of musicians and award-presenters.