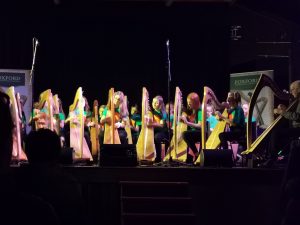 Michael Rooney led a masterclass for advanced students focusing on some of Michael’s own tunes in addition to tunes by other composers. All of the students were very enthusiastic about the experience and found it very inspirational.

Laoise Kelly led a very successful ‘Hands on Harps’ workshop at Foxford Woollen Mills. Seven harps were made available for members of the public to come and try the harp. Lots of children and adults had a go and the feedback was extremely positive.

Local harp maker Graham Wright held an exhibition of his work at Foxford Woollen Mills. It was an ideal opportunity for Graham to showcase his craft in addition to generating business.

Programming the exhibition and the ‘Hands on Harps’ workshop at the Mills was a success as there were a number of people just passing through who came across the event by chance, as well as those who came out specifically for the workshop.

The Music Generation Mayo Harp Ensemble, directed by Gráinne Hambly and William Jackson, opened the Saturday night festival concert with a 20 minute performance.  They received very positive feedback about the performance, from the organisers and from the audience in general.  Several people commented that they had never heard a few harps playing together before, and were blown away by the sound of 17 harps! The concert also included performances from Michael Rooney and from Eimear Coughlan, so the harp was very well represented overall.