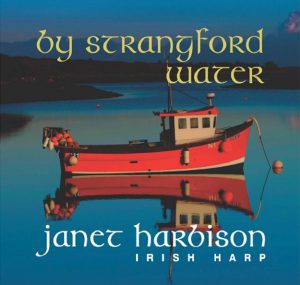 After a number of years recording with the Belfast and Irish Harp Orchestras and various groups who invited the orchestras (including the Chieftains, Brian Kennedy and Alfie Bow), Janet Harbison has finally produced her first fully original solo album of compositions since her debut album in 1985.

Her new album, By Strangford Water, includes some solo harp versions of tunes associated with multiple players – such as the ‘Bright New Morning’ and dramatic ‘Viking’ from her 2014 Brian Boru millennium suite ‘Lion of Ireland’. Both these ‘epic’ pieces feature characteristically original forms, rhythms and time patterns – and the more lyrical contemplative vocal piece ‘Kyrie’ also from ‘Lion of Ireland’, is presented as a solo harp version of a choral and orchestra piece.

These stand with new, purely solo works under the title track ‘By Strangford Water’ which was composed for a one-time boss and much cherished academic mentor, Professor Ronnie Buchanan. When his former ‘Fellows’ at Queen’s University (Belfast)’s Institute of Irish Studies held a colloquium for his 80th birthday in 2011, this was Janet’s contribution.

The track entitled ‘Farewell Joel’ is a tribute to Janet’s harp maker, Joel Garnier of Camac Harps. It was premiered at his 10th anniversary concert in Paris. Now, finally recorded, ‘Farewell Joel’ joins the repertoire.

Belying Janet’s traditional background, her pieces ‘Trip to London’, ‘Leap of Faith’ and ‘Whelan’s and Janet’s Jigs’ follow the formula of traditional dance tunes but there’s always a contemporary twist.

The final piece ‘Dance of the Water Sprite’ is a real ‘fusion’ between rock, pop, classical and Irish – in 4 over-dubbed ‘voices’ with some fierce fingerwork and lever changes.

A Trip to London: