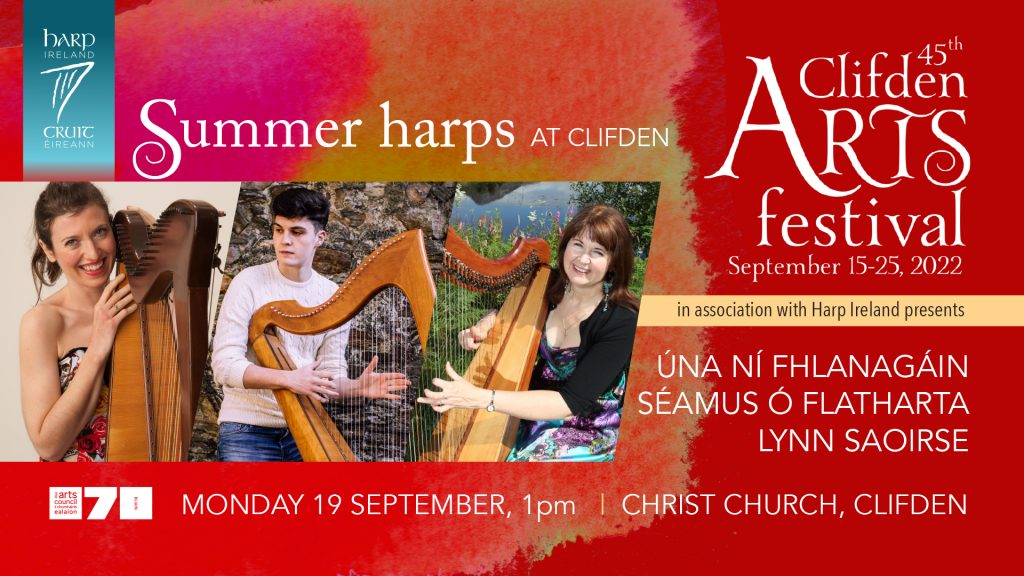 Experience some of Ireland’s finest harpers in concert, with Séamus Ó Flatharta, Úna Ní Fhlannagáin and Lynn Saoirse, as they perform an eclectic and entertaining mix of harp music, celebrating our national emblem.

The longest running community arts festival in Ireland, Clifden Community Arts Festival, now heading into its 45th year will take place from September 15-25 and yet again promises to have something to excite everyone in the 2022 programme.
Audiences can expect a very high quality artistic programme with a superb literary, musical and visual art content which again will have the community arts of Clifden and the surrounding hinterland as a central focus with creative writing, music, theatre and film workshops and performances taking place in the local schools for the duration of the festival. 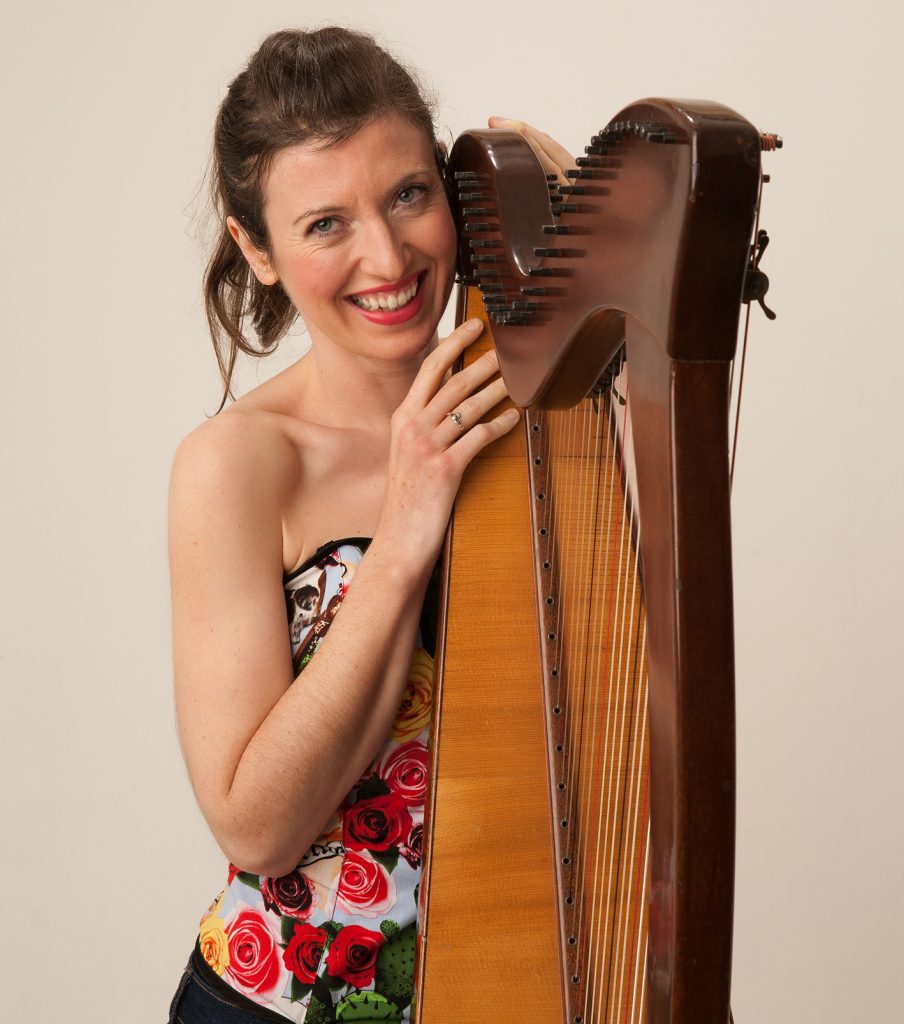 Úna Ní Fhlannagáin is an award-winning harper-composer and singer from Co. Galway, Ireland. She is rooted in diverse musical influences such as the dance music tradition of North Clare, the sean-nós singing style of Maigh Seola, the American post-minimalists and free jazz. She has performed her wildly energetic jigs and reels, delicate hornpipes and emotive slow airs throughout Ireland, Europe, North America and the Middle East, winning multiple prizes at the All-Ireland Fleadh, Keadue International Harp Festival, Oireachtas, O’Carolan Harp Festival, and Granard Harp Festival along the way. While studying for a first-class honour’s university degree, she branched into jazz and contemporary music and studied and performed with Anthony Braxton, the legendary free jazz musician and composer. Since then, she has won a commission from the World Harp Congress, had one of her pieces published by Cairde na Cruite, and performed her own compositions in Ireland, Croatia, Canada and the U.S., as well as performing with Grammy Award winner Bobby McFerrin.

Séamus Ó Flatharta is a multi-instrumentalist, singer and dancer from Áird Mhór in the heart of Connemara. Since the age of 16, he has been making waves in the fields of music, song and dance,  performing in China, The USA, Canada, The United Kingdom and throughout mainland Europe. He is highly sought after for his versatility and skill in each of his disciplines, has had the privilege of performing with accomplished groups such as Cherish the Ladies, The RTÉ Concert Orchestra and Riverdance  as well as at prestigious festivals across the globe, most recently as a guest musician on the 25th Anniversary Tour of Riverdance at Radio City Music Hall, NYC. Accumulating a total of 23 All Ireland Titles from the age of 7, Séamus has made regular television and radio appearances, including Other Voices and The Late Late Show. He is an accomplished singer and can be seen performing alongside his sister, Caoimhe, at various showcases across the globe. 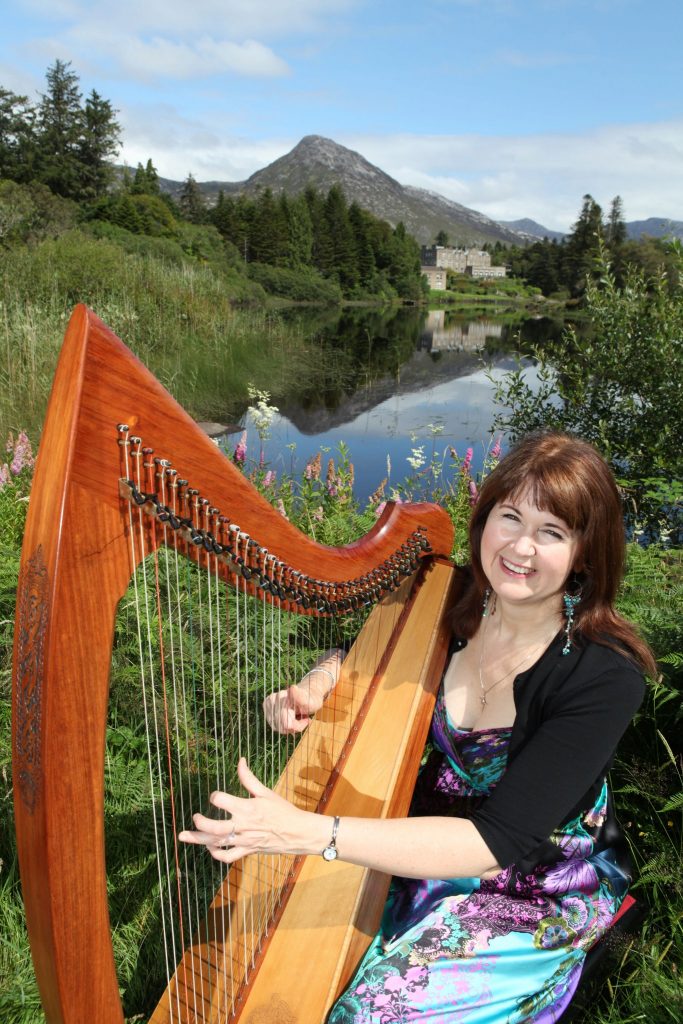 Lynn Saoirse has been living near Clifden for most of the last 36 years. She has performed widely: throughout Europe and across the USA, as well as in the Caribbean, Nepal, Argentina, French Guiana and Egypt.  She has recorded five albums of her own – as well as being a featured artist on seven other recordings. She has published a well-received book of her harp arrangements, with another in progress, and has taught at harp festivals in Europe, the USA and the Caribbean. Of her CD On the Bright Road,  Irish Music Magazine wrote: ‘Lynn Saoirse’s harp-playing has soul and feeling …  and is a joy to listen to’. The Irish Examiner wrote of: ‘Lynn Saoirse’s sparkling harp… and excellent originals.’ From Mike Scott of the Waterboys: ‘Listening to album of O’Carolan harp instrumentals by Lynn Saoirse called The Seas Are Deep. It’s exquisite.’