Harps for Heritage 2022 | The Schoolhouse at Muckross | Sunday 21 August 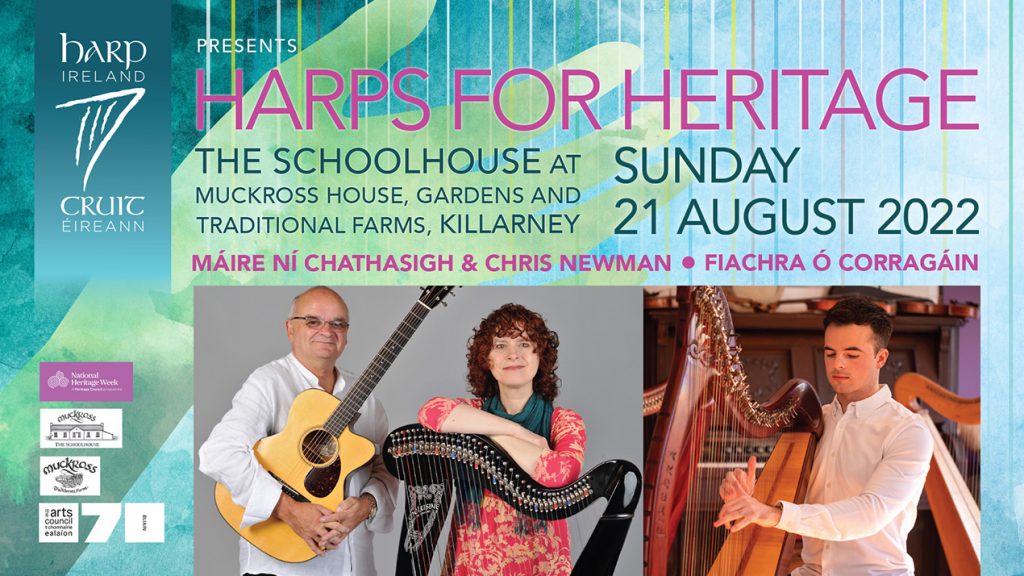 Máire Ní Chathasaigh is “the great innovator of modern Irish harping, a player of outstanding technique and imagination” (The Rough Guide to Irish Music) and one of Ireland’s most important and influential traditional musicians, spearheading the re-introduction of the harp into the mainstream of the living tradition. Described by the late Derek Bell as “the most interesting and original player of the Irish harp today”, she was the 2001 recipient of Irish music’s most prestigious award, Traditional Musician of the Year – Gradam Ceoil TG4 – a national recognition of her pioneering work. “Her work restores the harp to its true voice.” The Irish Times

Chris Newman is “one of the UK’s greatest musicians” (BBC Radio 2) and “one of the top guitarists of his ilk in the world” The Living Tradition. He has toured and recorded with many luminaries of the folk and jazz worlds, among them Boys of the Lough, Aly Bain and Stéphane Grappelli. “Dazzling” Acoustic Guitar (USA) “His playing boggles my mind” Flatpicking Guitar Magazine (USA)

Dr. Fiachra Ó Corragáin is a composer, musician, and researcher from Co. Cork and the harp is his main instrument. In 2016, Fiachra was conferred with a PhD in composition from UCC as the youngest doctoral music graduate in the university’s history. Fiachra has released two albums of harp music, Hidden Gems and The Enchantment. Fiachra has composed and produced music for stage and screen, including Ériu Dance Company’s Walls Talk and Salomé, and for the Canadian short film Sídhe. In 2018, Fiachra was commissioned to compose and perform Planxty Prince Charles in honour of the visit of Prince Charles to Cork. Fiachra has been involved in historical musical conservation efforts by transcribing wax cylinder recordings from the Henebry/O’Neill collections, arranging pieces from Captain Francis O’Neill’s collections, and developing and recording an online rendering of Edward Bunting’s entire first publication of music, including a full portfolio of recordings, buntingarchive.ie.