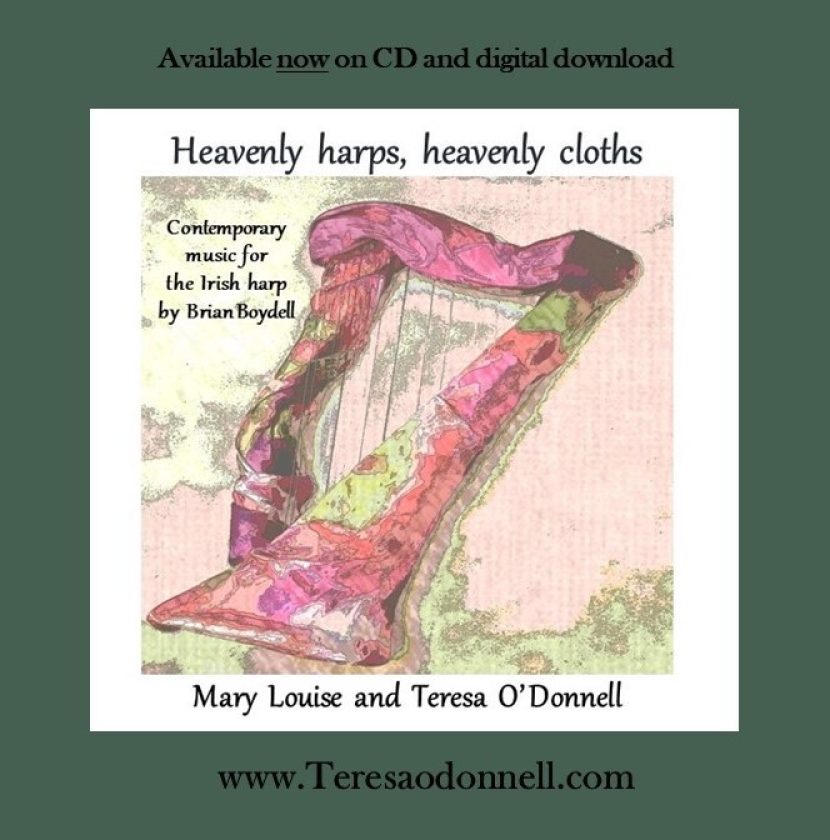 ‘Heavenly Harps, Heavenly Cloths: Contemporary music for the Irish harp by Brian Boydell’
NEW RELEASE from Mary Louise and Teresa O’Donnell (Irish harps/ Voice)
In 1961, Gráinne Yeats, along with fellow harpist Mercedes Garvey (neé Bolger) commissioned Brian Boydell to write for two Irish harps. Boydell had never written for the instrument but was persuaded by Yeats, his close friend and musical collaborator.
Yeats was a harper, singer, teacher, arranger, historian, academic, founder member of Cáirde na Cruite (Friends of the Harp), and a pioneer in the harping world in Ireland in the latter half of the twentieth century. Yeats and Garvey premiered the work along with newly composed pieces by Ruth Mervyn and T.C. Kelly at the Eblana Theatre on 11 March 1962. To say this evening was a defining moment in the history of the Irish harp in the twentieth century is not an exaggeration. The premiering of works by contemporary Irish composers changed the perception of the Irish harp and introduced the instrument to audiences and composers who hitherto had shown no interest in it. Critics who attended the premiere were astounded by the originality of the Four Sketches for Two Irish Harps (op. 52). The critic, Charles Acton, lauded the work as ‘a really important break-through’ that showed ‘the Irish harp as a serious instrument for the art music of our time’.
Available on CD and digital download from this Bandcamp link or from www.Teresaodonnell.com.