What is your name / where are you from?
Marta Cook, Zhigaagoong (Chicago), unceded Niswi-mishkodewinan land.

How did you start playing the harp?
My mother’s singing and her appreciation of Irish music and history have been deeply influential to me since I was very young. I loved all her records, especially when she would pull up the carpets and let me roller skate to De Danann and The Chieftains! I first started as a young child with piano lessons and step dance, but the harp was the instrument that captured me. I just assumed I would play the music that I related to most on it, and Máire Ní Chathasaigh’s seminal 1985 album, The New Strung Harp, deeply confirmed this idea. It also eventually led me to her class at Gaelic Roots, which was a fabulous and life-changing event for me as a young teenager. I am forever grateful to Máire for her deep knowledge, support, and friendship.

I also want to acknowledge the late Robin Morton, founder of Temple Records and producer of The New Strung Harp, who passed away on October 1. I’m grateful for his generosity in sharing stories and insights during some great times at the 11th St Pub. It was always a pleasure and an honor to meet him and his partner Alison Kinnaird, the extraordinary harper and artist. My deepest condolences to their family.

What does the harp mean to you?
The stories I treasure as a traditional musician, given to me by Máire, Ann Heymann, and the late Kevin Henry, have collectively led me to experience the harp as a cradle of practice-based knowledge, the cosmological center of a social order in which the nonlinear is embedded as an integral part. Nothing in this paradigm is strictly binary, ever. Thus the harp represents a threshold, both masculine and feminine, and also neither. Ann interprets this as expressed linguistically in the oldest terms surrounding the instrument, relating to birth. So it’s a creation story: the origin of life and of creativity. This is why the harp is so deeply symbolic—because it contains the heart of the entire cosmology.

I’m convinced that there is quite a lot of the ancient embodied continuously within living traditions. In terms of aesthetics: venerating the subtle over the obvious, for example. Giraldus Cambrensis wrote in Topographia Hiberniae of Irish harpers in the 12th century: “They glide so subtly from one mode to another, and the grace notes so freely sport with such abandon and bewitching charm around the steady tone of the heavier sound, that the perfection of their art seems to lie in their concealing it, as if ‘it were the better for being hidden.” He could just as easily be writing about any of the great traditional musicians of the present, or the last two hundred years.  Clearly, transformative creativity endures – as do creative practices in which listening is doing, doing is learning, and poetic imagery is practical advice

What do you like most about Lá na Cruite | Harp Day?
I love that Lá na Cruite/Harp Day highlights the connections we have to each other and builds new relationships across time and space for both players and listeners. In working on The Monarch Cycle, a collaborative project with Ann Heymann for Harps From All Corners, I’ve both reconnected with harpers I’d lost touch with for years, and connected with others for the first time. It’s a great opportunity to reflect both on being interconnected and interdependent, and on the nature of that harp itself: we have to imagine the sound very vividly, prepare the articulation, and then let go. Our creative imaginations as harpers are extremely powerful. What we are doing with them matters. It’s wonderful to have a day to honor that together. 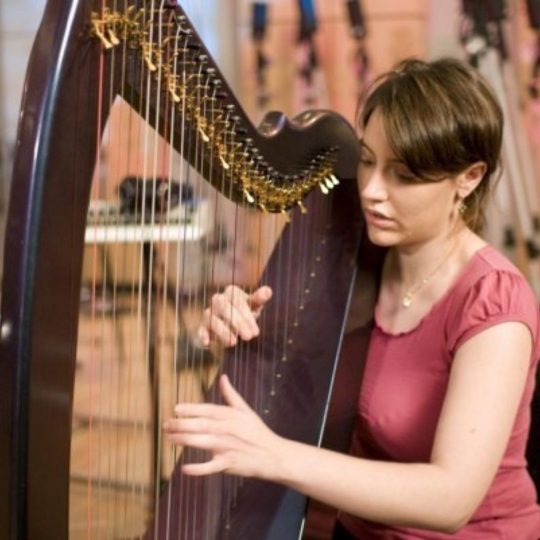