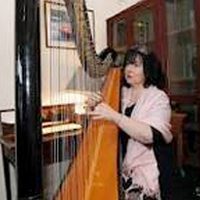 Co-editor of Rogha na gCruitirí, Harpers’ Choice, Dubliner Áine Ní Dhubhghaill was immersed in Irish traditional music from an early age. She has performed at numerous harp festivals and concerts around the world including the US, Hungary, the Netherlands, Brittany, Wales, Scotland, England, Germany and Vietnam. She has premiered compositions by Savourna Stevenson and Mícheál Ó Súilleabháin and her recordings include several film scores and CDs as well as a feature on renowned Irish broadcaster Ciarán MacMathúna’s series A Touch of the Master’s Hand. As a Concert Harpist, Áine has played with orchestras and ensembles including the RTÉ Concert Orchestra and the National Symphony Orchestra of Ireland. She teaches harp at the Royal Irish Academy of Music and has been a committee member of Cáirde na Cruite for many years.