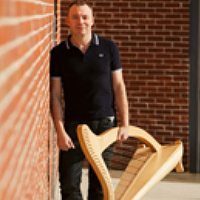 A native of Dublin, Cormac was raised in an Irish-speaking family of musicians and singers. He is a third generation harper, having first studied Irish harp with his grandmother, Róisín Ní Shé, before going on to study concert harp in the United States. He has performed across the globe both as a solo artist and with many of Ireland’s most respected and well-known artists including Clannad, Dervish, Altan, Moya Brennan and Brian Kennedy.

Cormac has made numerous recordings, including two CDs with members of the De Barra family and two under the title Voices & Harps, with Grammy Award-winning singer and the voice of Clannad, Moya Brennan. He has also recorded two harp duo CDs with harpist and composer, Anne-Marie O’Farrell. Cormac has also enjoyed a career in televison, having presented the traditional music series Flosc and three years as main host of the flagship arts series, Imeall, on the Irish language television station TG4.