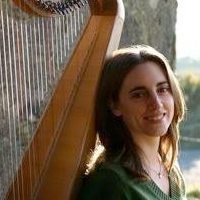 Gráinne Hambly is an internationally recognised exponent of the Irish harp and is in great demand as a performer and teacher. With a Masters in musicology from Queens University in Belfast. She specialises in teaching Irish traditional music ‘by ear’ and is also an accomplished concertina player.

Gráinne has been playing professionally as a solo musician for many years and has appeared on numerous occasions in Germany, France, Italy, Switzerland, Brazil, Colombia Israel and Japan as well as touring extensively in the United States giving concerts, workshops and masterclasses. Gráinne has attracted glowing praise for her mastery of the instrument and has released 3 critically-acclaimed solo CDs and a collaborative recording with Scottish Harper William Jackson.