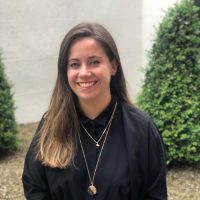 Gráinne O’Hogan is currently Director of Development at Social Entrepreneurs Ireland, a non-profit organisation that finds people with solutions to social problems and supports them on every step of their journey to solving those problems at scale.

Having previously worked with the London Symphony Orchestra and the Choral Scholars of University College Dublin, Gráinne has extensive experience in non-profit and arts management, specifically in fundraising and production.

Gráinne began the harp at a young age with Comhaltas Ceoltóirí Éireann, and later studied with Ann Jones, as well as studying piano and solo singing. She has been a member of New Dublin Voices, under the direction of Bernie Sherlock since 2011, serving as Secretary of the choir from 2012-2014. Gráinne holds an MA in French and English Literature from the University of Edinburgh and an MA in Arts