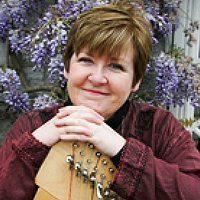 Dublin born Janet Harbison has been a dynamic figure in Irish harping since winning all national harp competitions 1979–’81. She has since performed, toured and taught widely throughout the world while also an acclaimed composer.

Graduating from Trinity College Dublin (MA, 1982), Janet moved to Belfast with a Research Fellowship at the Institute of Irish Studies at Queens University. As Curator of Music at the Ulster Folk Museum (1986-’94), she directed festivals, conferences and exhibitions, including the Belfast Harpers’ Bicentenary (1992) and the World Harp Festival Belfast, while continuing to direct Glencolmcille and Belfast Harp Festivals and Summer schools (1986-2002).

Most notable was her cross-community Belfast Harp Orchestra (1992-2002) featuring 20+ teen harpers with guest artistes, who performed widely (including for TV and film) – and also with James Galway, Alfie Boe and The Chieftains (with whom they won a Grammy Award in 1993). Personal awards include from The Flax Trust (peace and reconciliation), BPW Woman of the Year and an honorary doctorate from Ulster University.

In 2002, Janet established the Irish Harp Centre (residential college) in Castleconnell, Co.Limerick until in 2016, she returned to Ulster University as Visiting Professor of Music.