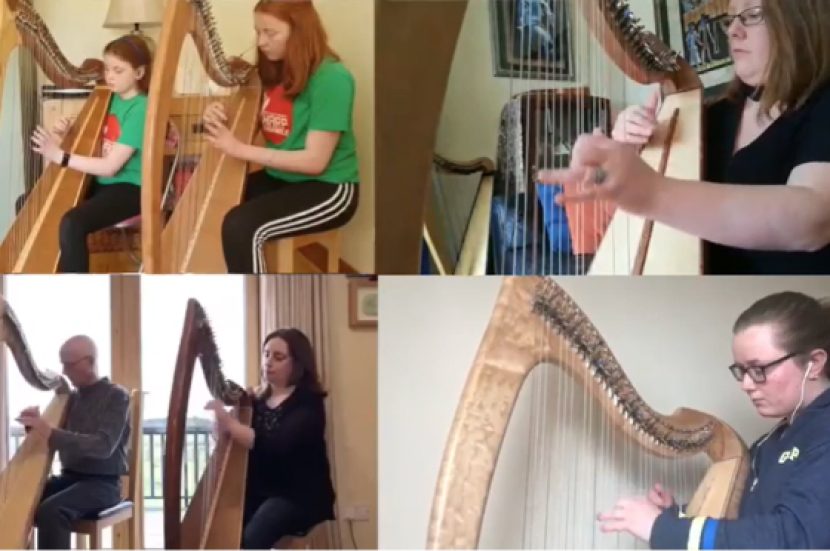 In light of the new national public health measures young musicians from counties throughout Ireland have joined forces to form a virtual Music Generation Harp Collective. The collective of 52 young harpers and four tutors from Music Generation Harp Ensembles in Laois, Louth and Mayo has released a video performance dedicated to front-line workers and all the young people who are following guidelines and staying at home to help stop the spread of COVID-19.

The three groups had previously been scheduled to travel to the World Harp Congress, Wales, in July 2020, where they had secured performance opportunities, including the premiere of new music by Sligo harper Michael Rooney. The Congress, which has since been postponed until 2021, is rarely hosted so close to Ireland and for many of these young people will create a once-in-a-lifetime performance opportunity.

Determined to keep up momentum in the interim and to keep making music from home, the young people and their mentors have come together to perform in a virtual way. With help from tutors Siobhán Buckley (Laois), Deirdre Ní Bhuachalla (Louth), Gráinne Hambly and William Jackson (Mayo), each musician recorded their own individual performance of ‘Elizabeth Kelly’s Favourite’, arranged by Gráinne Hambly and William Jackson. Siobhán, harper and leader of the Music Generation Laois harp programme, then combined the recordings to create one epic virtual performance. The whole process, from idea to release, took just over a week.

This is just one of the ways that Music Generation has responded to Government’s new public health measures, which have required the suspension of many music programmes ‘in person’. Across the network of 25 cities and counties currently participating in Music Generation tuition is being moved online and new digital resources for children and young people are being prepared.

Ordinarily, each Harp Ensemble in Laois, Louth and Mayo would meet on a regular basis to practice, play and perform. This collective effort is a way to keep music alive for the young harpers, and a way of sharing their work with friends, family and the public. They were particularly keen to acknowledge the ongoing efforts being made by all young people staying indoors to protect themselves and those in their communities, as well as those at the front-line of COVID-19. The Harp Collective has dedicated this performance to them.

The 52 players featured in the video meet annually at the Music Generation Laois ‘Tionól for Harps and Pipes’ in November, as well as at Cairde na Crúite’s annual Harp Ensemble Day in Louth each July. They were also scheduled to perform as a group at Fleadh Cheoil na hÉireann 2020 in Mullingar, which has also now been postponed until 2021. There is a great sense of unity and fun among the young musicians, and pride in their ongoing promotion of the harp, our national instrument. To showcase these developments in the Irish harp at the World Harp Congress in Wales in 2021 will be particularly important.

Last year the Irish Harp was inscribed by UNESCO on the Representative List of the Intangible Cultural Heritage of Humanity. The last decade has seen a resurgence in harping among young people across Ireland, propelled by the work of organisations including Harp Ireland, Comhaltas Ceoltóirí Éireann, Cairde na Crúite and Music Generation. This virtual performance is also a celebration of this great harp revival for our younger generation.

Locally, Music Generation Laois is led by Laois and Offaly Education and Training Board with support from Laois County Council.

Music Generation Louth is led by Louth and Meath Education and Training Board in partnership with Louth County Council.

Music Generation Mayo is led by Mayo, Sligo and Leitrim Education and Training Board, in partnership with Mayo County Council.