Paddy is one of the leading Irish harp makers of his generation. We aimed to produce a record of his precious workmanship and to celebrate the contribution he has made to the harp world. 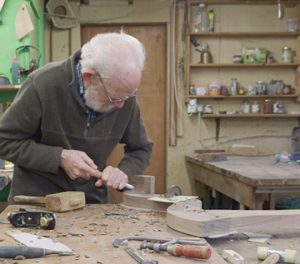 The film followed Paddy in the process of making one of his harps. We are given an insight into the precision, artistry and dedication needed to complete a harp of the calibre of his instruments. Musicians who play Paddy’s harps include Laoise Kelly, Kathleen Loughnane, Tríona Marshall, Aileen Kennedy and Elaine Hogan; each of them has fallen under the spell of the Cafferky harp.

It would seem that to receive one of Paddy’s harps was to be taken under the protective wing of Paddy and his wife Toni. In a characteristically understated reaction to the film, Paddy extended a huge debt of gratitude to all those who play his harps declaring; ‘You have enriched our lives in so many ways.’
Concert of Paddy Cafferky Harps

The film premiered at Achill International Harp Festival 2018 and was followed by a concert that consisted entirely of harpers playing Paddy’s harps. A once in a lifetime event; those in attendance were treated to solo performances and a concluding collaboration by Laoise Kelly, Kathleen Loughnane, Catríona Cannon, Elaine Hogan and Tríona Marshall. It was a moving occasion but ultimately an entirely fitting tribute to this giant of Irish harp making.