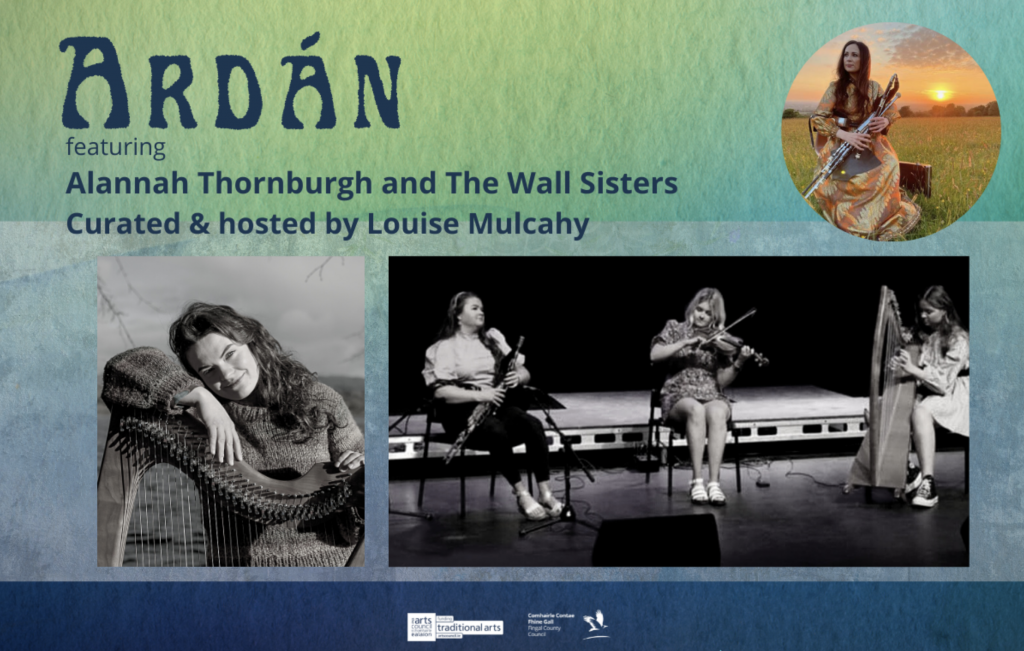 On April 30, 2022 award winning instrumentalist and composer Alannah Thornburgh, and All-Ireland winners, The Wall Sisters, take to the stage at the Séamus Ennis Arts Centre.

Ardán is as an exciting series of concert performances featuring emerging female Irish Traditional musicians.
Curated and hosted by renowned Irish traditional musician, Louise Mulcahy, the concert series will feature both solo and group performances to a live and streamed audience. The Séamus Ennis Arts Centre is committed to develop the newest generation of traditional artists. In line with this Louise will work closely with the artists to deliver a special concert programme.

Alannah Thornburgh is an award-winning instrumentalist and composer from the wild west of Ireland with a focus on traditional Irish harp. Alannah’s music explores her family heritage, reimagining ancient airs and tunes from the Irish harping, American Appalachian and jazz traditions. This cross-genre interaction and juxtaposition of old melodies with contemporary harmonies and technique is interwoven throughout her music, creating an innovative style described as ‘mind-blowing magic’ by The Bluegrass Situation (USA).

Alannah’s debut solo single ‘The Front’, a homage to the late minimalist composer Conor Walsh, was premiered on Seattle’s KEXP to great critical acclaim. She was nominated for two awards at the 2021 RTE Folk Awards – Best Emerging Artist and Best Folk Instrumentalist. Alannah is also a recipient of the Arts Council’s Next Generation Award 21/22. She is a founding member of Alfi, a trio who combine traditional Irish and Appalachian music and song, winners of the 2020 US Embassy Creative Minds Award. She is currently working on her debut solo album, as well as an album with Alfi, both due for release in 2022.

The Walls Sisters hail from Toomebridge in County Antrim and are winners of many Antrim, Ulster and All-Ireland titles on Fiddle, Harp and Uilleann Pipes. They have performed all over Ireland in various venues including the National Concert Hall in Dublin ,the Waterfront Hall in Belfast and Vicar Street . The Sisters have also featured on BBC Trad Ar Fad, Susan Calman’s Grand Days Out on Channel 5, TG4 Gradam Ceoil and Siar Chuig an bhFleadh. Individually they have been part of performances with The National Folk Orchestra, Uachtarán na hÉireann and the Imbolc Orchestra.