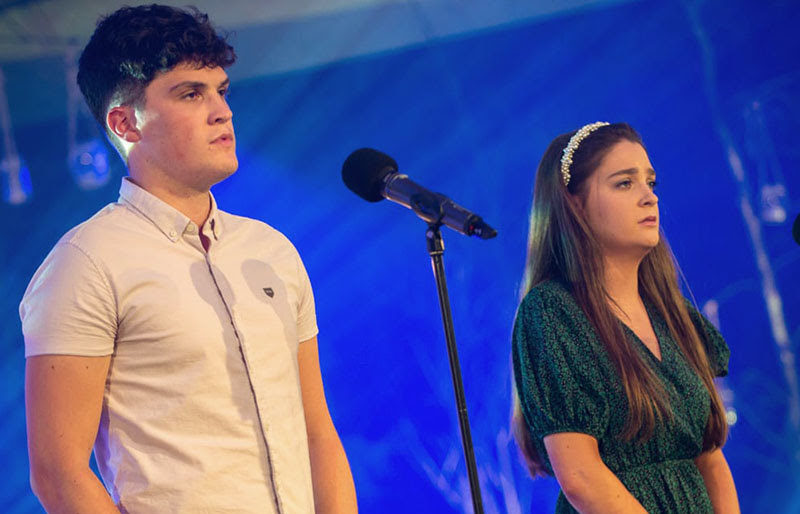 Caoimhe and Séamus Uí Fhlatharta from Connemara are set to perform at TradFest Temple Bar, which will be one of the world’s first trad-folk festivals to welcome audiences back in person. Deeply immersed in traditional Irish music from a young age, the siblings have become accomplished multi-instrumentalists, singers and dancers. They are particularly noted for their unique arrangements of well-known standards, offering interesting vocal arrangements and harmonisations. Both Séamus and Caoimhe are multi All-Ireland winning performers who keep their language and heritage at the heart of all their musical endeavours. 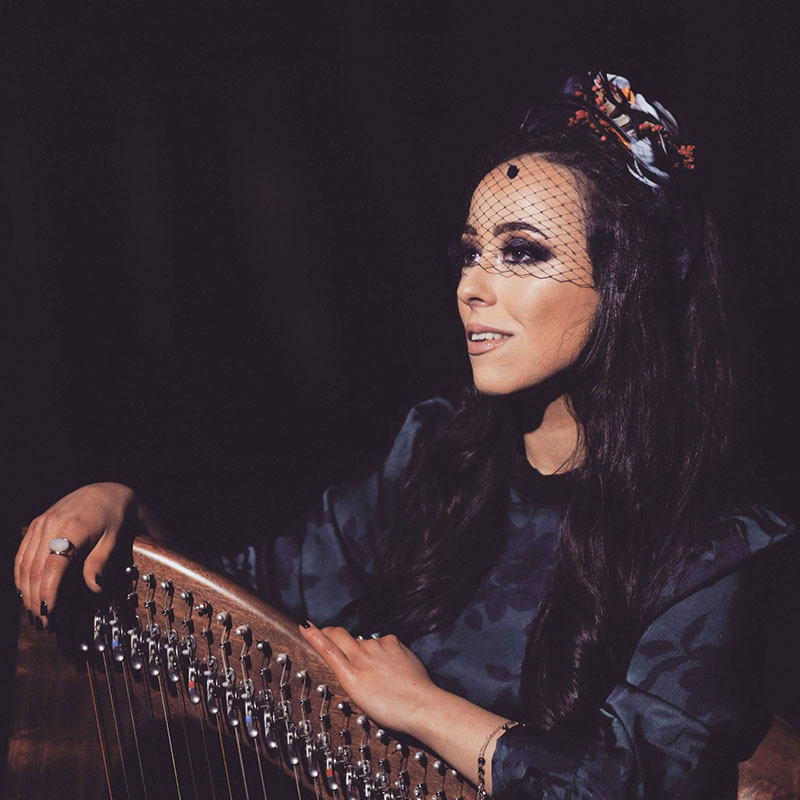 As a fourth-generation musician, Brídín has songcraft embedded in her DNA. Over the past number of years, she has developed a distinctive style influenced by her West Sligo surroundings and rooted in her background in traditional Irish music. Employing loop and effect pedals to create her musical pieces, layered melodies on harp and voice blend beautifully with contrapuntal fiddle, electric guitar and bass, punctuated with pulsating drumlines. A master’s graduate of music and performance from UCC, her debut EP of contemporary folk debuted in 2020 to widespread acclaim. Her’s is a new vital sound in Irish music. 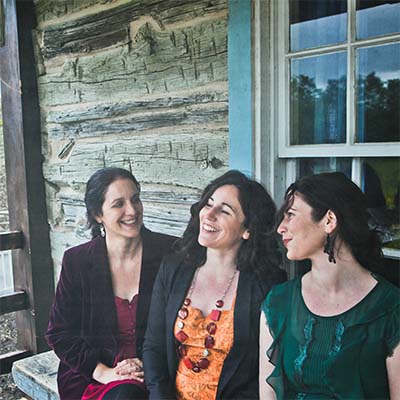 The Henry Girls are three sisters from the beautiful village of Malin in Co. Donegal. Having produced bands such as Clannad and Altan, Donegal has a reputation for its music which is beautiful enough to rival its awe-inspiring landscape, and The Henry Girls are part of the proof. The sisters combine something of their Irish heritage with a much more contemporary sensibility and imbue it with compassion, insight, and warmth, both in their lyrics and their magnificent musicianship. The reviews have been exquisite, with The Sunday Times describing their latest album as ’astonishing’. See them live and you will drift away with impeccable harmonies and catchy melodies, all with a dollop of that world-famous organic Donegal style. 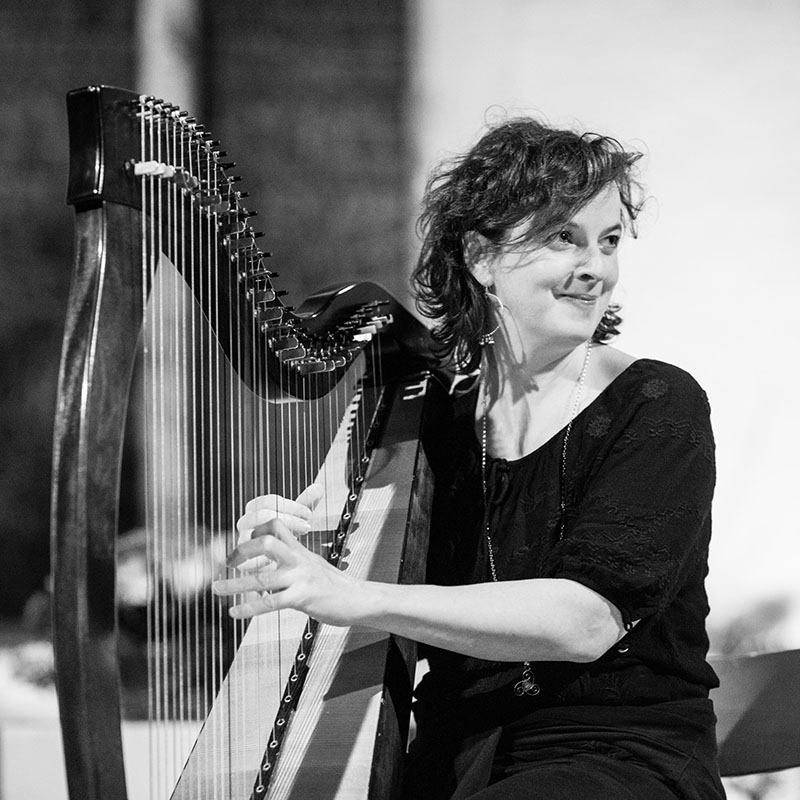 Westport’s Laoise Kelly, now living on Achill Island, is widely regarded as the most significant harpist of her generation. She employs a unique style of playing on a thirty-four gut-strung Paddy Cafferky harp and throughout her lauded solo career has featured on over 70 albums with many of Ireland’s foremost artists including The Chieftains, Christy Moore, Sharon Shannon and Dónal Lunny, as well as Kate Bush. She has recorded three critically acclaimed solo albums, is the director of the Achill International Harp Festival and in 2020 was awarded the TG4 Gradam Ceoil Musician of the year. 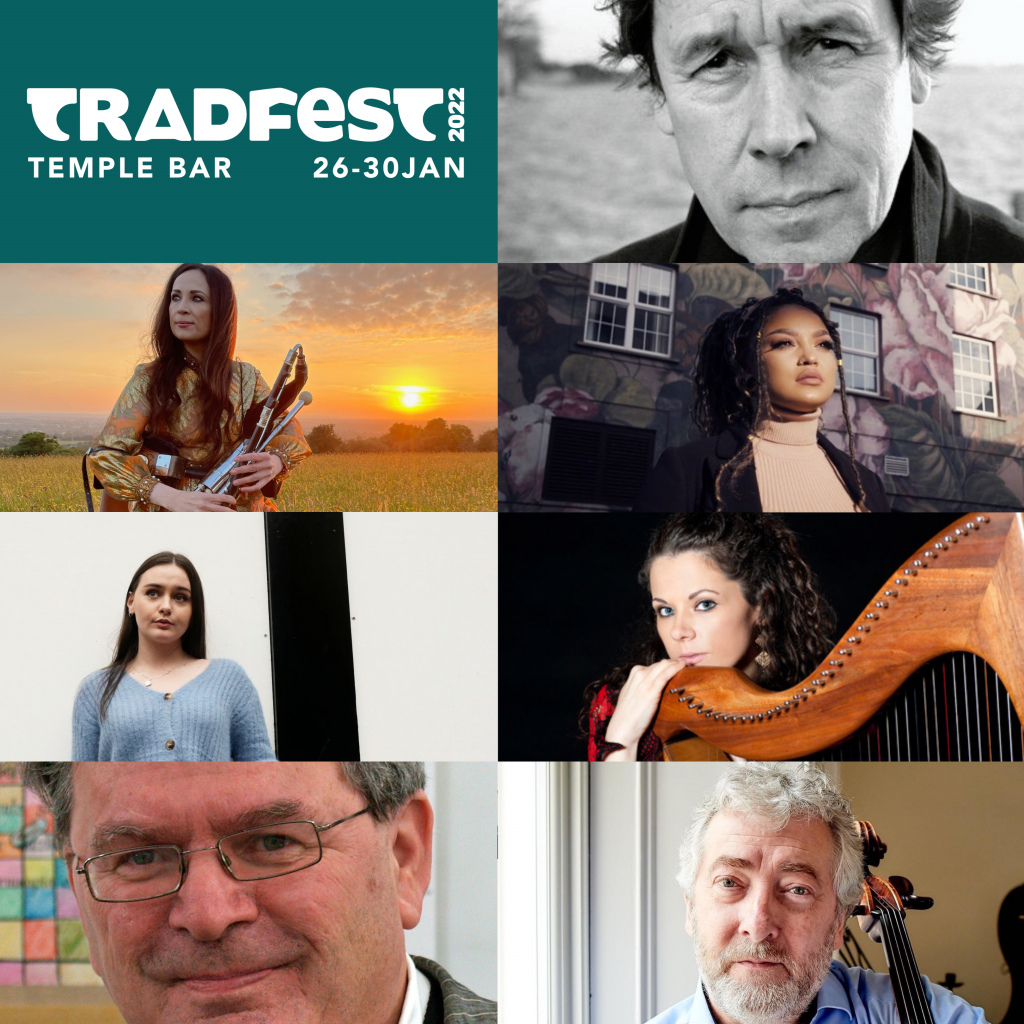 A celebration of Ireland’s leading poets and Irish traditional musicians.
Hosted by renowned actor & Tradfest Patron Stephen Rea, and featuring Ireland’s leading poets Natalya O’Flaherty and Sasha Terfous, together with acclaimed Irish traditional musicians, Louise Mulcahy, Michelle Mulcahy and Neil Martin will explore the fascinating artistic relationship between the Irish literary tradition and Irish traditional music. Key figures in Irish poetry have brought a rich history of contributions to verse in both the Irish and English language. Works by Kinsella, Heaney, Mahon, Muldoon, remarkable contemporary poets O’Flaherty and Terfous, among others, have achieved national and international acclaim. Together they will celebrate this rich legacy.

Dr. Michelle Mulcahy is an award winning, multi-instrumentalist and music academic from Co. Limerick. As well as releasing four of her own critically acclaimed albums, she has featured on recordings arranged by renowned composer Bill Whelan. Michelle has made appearances on radio and television in Ireland and abroad such as TG4 Geantraí, Gradaim Ceoil TG4, Hup, RTÉ Fleadh Cheoil na hÉireann, and BBC Port. Mulcahy lectures at the University of Limerick in in Irish World Academy of Music and Dance, and her PhD research publication topic is the first of its kind, exploring the harp tradition of Burma and Ireland.

Louise Mulcahy is a multi-award-winning performer on both uilleann pipes and flute. Alongside four album releases with father, Mick, and sister Michelle, Louise also appeared on Na Píobairí Uilleann’s compilation of young uilleann pipers ‘A New Dawn’. Recently, Louise was presented with The Arts Council’s Markievicz Award. Louise was awarded the 2016 Doctoral Fellowship in Irish Music Studies at NUI Galway and her work on women in uilleann piping is due for release in a landmark documentary for TG4 titled, Mná na bPíób.

Join us for 'St Brigid’s Day' as we celebrate the rich history and culture of the Irish Harp tradition.
Award winning harpist Dr Helen Lawlor will be performing with vocalist Dr Sandra Joyce. Alongside some wonderful performances, we will delve into the stories of the women who shaped the Irish Harpist tradition. 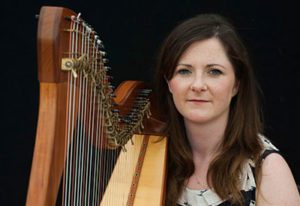 Dr Helen Lawlor:
Dr Helen Lawlor (neé Lyons) is a musician and academic, specialising in Irish harping. She specialises in research on music in Ireland with a focus on the musical practice, education and history of the harp. She is author of Irish harping 1900–2010 (2012) and co-editor with Sandra Joyce of Harp studies: perspectives on the Irish harp (2016). Her work is also published in The Encyclopaedia of Music in Ireland, Ancestral Imprints, Sonus, American Harp Journal, JSMI and JMI. She a member of the editorial board of the JSMI and is Secretary of Performance Research Ireland. Helen holds a BMusEd (TCD), MMus (UCD) and a PhD (UCD) for which she was an Ad Astra Research Scholarship recipient. Helen has performed and taught traditional Irish harping at numerous international music festivals including the Interceltic Festival (Lorient), Scoil Samhraidh Willie Clancy, Blas and The Gaelic Roots festival in Boston. 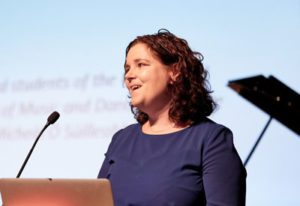 Dr Sandra Joyce:
Dr. Sandra Joyce is co-editor, with Dr Helen Lawlor, of Harp Studies: Perspectives on the Irish Harp, a publication which focuses on diverse aspects of the Irish harp tradition. She has established the TradSong Research Cluster at UL, which is a collection of scholars working in the area of Irish traditional song and related areas. A singer and bodhrán player, she has performed internationally, most recently in the Irish Cultural Centre, Boston and the Irish Embassy, Beijing. Her research focuses primarily on the Irish harp and song traditions.