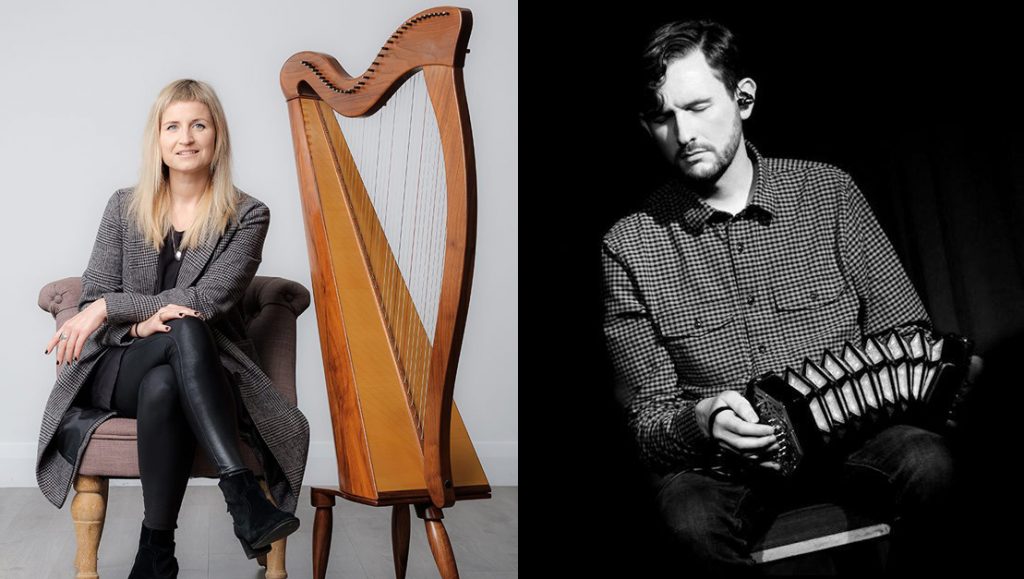 Pádraig Rynne is a virtuoso musician, prolific composer and is regarded as one of the finest concertina players in Irish music today. With a passion for experimenting with diverse genres, Pádraig is recognised for his refreshing explorations into the Irish Tradition and beyond, and he has founded and worked with some of the most exciting ensembles in the music scene today. Harpist, Elaine Hogan is trained in both the classical and traditional genres, and has toured extensively, playing alongside many extraordinary musicians. Elaine Hogan and Pádraig Rynne first met while in secondary school and competed against each other with their schools in Slógadh.

TRIP, formed in late 2016, are a Glasgow based five-piece band whose music spans four corners of the Celtic diaspora. Their considered arrangements intertwine the traditional melodies of Scotland, Ireland, England and the Isle of Man with contemporary and self-penned tunes to produce a powerful, driven and distinctive sound. The impressive line-up features Newcastle accordionist Michael Biggins, Sligo flautist Tiernan Courell, Manx fiddler Isla Callister with Scots Rory Matheson on piano and Craig Baxter on bodhran. All currently in their 3rd year at the Royal Conservatoire of Scotland, they are at the forefront of the innovative movement of young traditional musicians on the Glasgow scene. The band have performed all over the UK and further afield, including appearances at internationally acclaimed festivals such as Celtic Connections, Orkney Folk Festival, HebCelt and Festival Interceltique de Lorient. They were also semi-finalists in the BBC 2 Young Folk Awards.